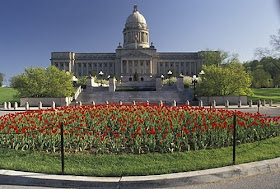 I know I generally keep these posts focused on local (Fort Thomas) news but a couple of items from Frankfort have too much potential impact on our community to ignore. As you may have heard there was a special session recently that required our legislators to return to Frankfort for discussion and voting. In this session there were a couple of bills they had to take to a vote.

The first item was dubbed the 'tax incentive bill' and focused on items to stimulate the state economy. It is famous for tax incentives for Newport on the Levee and the Ky Speedway that could have provided enough incentive to finish out the original plan for the Levee (which included a hotel and more) and bring a major race to the Speedway. However because the bill included a provision to allow tolls to be used for mega projects like bridges. There was no specific mention of the I-75 bridge but even the possibility was enough for all but 4 NKY lawmakers to vote no on the bill. What happened to negotiation and finding common ground? How is possible that our elected officials insist on playing politics instead of finding the right solution. I can't imagine if I made decisions at my place of employment this way - we would have gone bankrupt decades ago. Stop layering on pet initiatives, projects, and causes on bills that make sense - we have to start making the right decisions for our state.

The second, and some might say equally appalling, item that saw debate but ultimately met its demise was the gambling initiative. Without inciting backers on both sides of the debate I do find it ironic that in the same week this bill is voted down the Argosy's $300m+ remake is completed in neighboring Indiana. By the way neighboring Indiana has a $1B surplus while Kentucky and Ohio continue to struggle mightily to balance a budget. That surplus is not there because of gambling but because of sound fiscal and political management. Kentucky should take a lesson.
Darrin Murriner at 2:05 PM 1 comment:
Share

Woodfill - Wow, What a Miss

Staggering blow today with news that Woodfill's bids have come in 12.5% over budget or $1.1m. Given the current economy this is a huge miss in estimation and will eat into 'urgent needs funds' that could have been used in other places in the district.

I know I have mentioned this before but doesn't this count towards the $924m in stimulus funds dedicated towards education in the state of Kentucky alone? Where is this money being spent? I know the state of Kentucky launched a site to inform citizens of how the money is being allocated but it is sorely lacking in details.
Darrin Murriner at 10:49 PM 1 comment:
Share

Yesterday we got an update on the Vision 2015 plan (although the website doesn't appear to be updated) and one of the items reviewed was 'a bold vision of trails, open space and entertainment venues for the riverfront'. This vision is the same vision mentioned in this past post on Fort Thomas Matters from March 17th on the Southbank partners.

Then today we get word that the river cities have invested a grand total of $225,000 including a contribution from Fort Thomas to do some planning and hiring a lobbying firm to secure federal dollars. The article does not mention the exact amount invested by Fort Thomas but since there were 6 municipalities that contributed it was likely $37,500.

My biggest concern is that most of the plans I have seen are focused on the central riverfront and will provide the strongest benefit to Newport, Covington, Bellevue, and Dayton. Yet Newport did not make an initial contribution to the effort. No details have been sketched in regards to the plans for Fort Thomas' riverfront and it will likely be the last phase of the plan which could be decades away if it is realized at all. I am hopeful - I would just like to see some firmer plans.
Darrin Murriner at 10:13 PM No comments:
Share

Work on the Midway

While ultimately I do believe the Midway can look great, on my way to the Y yesterday my worse fears were realized regarding the street scape work along Fort Thomas Ave. Removing the trees and burying the lines highlight the public housing that exists next to the Midway.

In the poll on the right side of this site I asked the question "What Cincinnati neighborhood would you most like to model the Midway?" and an overwhelming response (32%) indicated Mt Lookout Square. I submit to you a picture comparison - you tell me if we are on the way to realizing that vision? 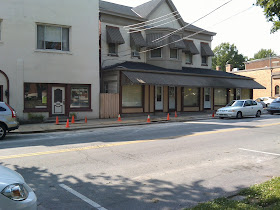 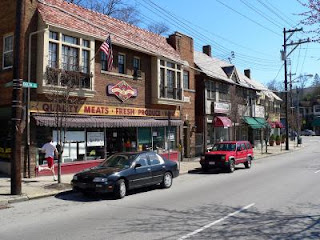 I know they will eventually replant some trees along the sidewalk but for the next couple of years this only going to serve to expose the HUD housing along our primary retail route.
Darrin Murriner at 10:00 PM 2 comments:
Share

While this isn't a blog about Cincinnati some recent proposed zoning changes could have huge future implications for Northern Kentucky and subsequently Fort Thomas. The proposed zoning would prohibit new building in the sightlines of 35 of 48 high-priority public view corridors identified in a 2007 study by the Hillside Trust Inc.

The proposal could be voted on by September and once the economy recovers could have developers flocking to Northern Kentucky for those great views. One location that immediately comes to mind is on Memorial Pkwy where fill dirt has been added for nearly 3 years or more.
Darrin Murriner at 3:12 PM No comments:
Share

Highlands and Pergola - A Source of Pride

Two things from Friday give me great pride in Fort Thomas.

The first is Highlands High School - again ranked among the elite public high schools in the nation climbing a whopping nearly 200 places in the Newsweek rankings to 572. Highlands rankings from the past 5 years show an incredible leap in the past couple of years from a fairly consistent spot in the 800's.

It is an incredible accomplishment and everyone on staff and the students should be commended.

The second source of pride comes from the opening night of the new restaurant on the Avenue - Pergola. The place was hopping and it is exactly what we need to bring some life to the main street through town. It gives the impression that the city is alive. We had guests at our house who had never been to Fort Thomas and they wanted to talk about the restaurant down the street and how amazing the community is.
Darrin Murriner at 9:46 AM 3 comments:
Share
‹
›
Home
View web version