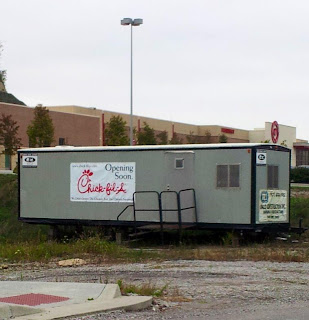 The long waited addition to Newport Pavilion's anchor tenants, Chick-Fil-A, has a trailer at the location near Carothers Road, with a sign stating that the restaurant is "Opening Soon."

After posting this picture with the caption, "Who's Excited?!" garnered over 100 "likes" and 44 comments  on our Facebook page (14 being negative about the chicken retailer moving in), I'm not going to get too political about anything on FTM.

I like their chicken and I'm happy they are moving to our area. Per one of our Facebook fans, the franchisee is a Fort Thomas resident as well.


The Newport Central Catholic Thoroughbreds fell 12-7 to the Covington Holmes Bulldogs on the road Friday.


NewCath (2-4 overall) played well defensively allowing just 210 yards of total offense. But the Thoroughbreds only punched the ball in the end zone once.


It came in the fourth quarter. Quarterback Josh Cain threw a 41-yard score to Mac Franzen.


Holmes moved to 4-2 to match last year’s win total. The Bulldogs finished 4-7 last year losing 66-20 at Johnson Central in the first round of the Class 4A playoffs.


Cain completed 15-of-35 passes for 178 yards and three interceptions. Franzen had four catches for 94 yards.


CYNTHIANA – The Highlands Bluebirds football team’s coaching staff likes to use games like these to get the reserves on the field and evaluate them.


They saw plenty of action in the second half with the Bluebirds leading 42-10. Some made their mark in the 69-10 Class 4A, District 7 victory over host Harrison County.


“It gets exciting as a young guy,” said Dale Mueller, Highlands Co-Head Coach. “You’ve been playing freshmen and JV. When you get in a varsity game, you’re just fired up to play. But it’s still all the same stuff. That’s how guys getting better. They play a full freshmen schedule and a full JV schedule.”


Two sophomores carried the ball twice each on Highlands’ only four intended running plays. Josh Watson had a 20-yard run and James Grau scored a touchdown from two yards out in the fourth quarter.


“It feels great preparing for next year,” said Sam Little, Highlands junior offensive linemen. “That’s what football is all about – just getting better.”


Like most opponents, the Bluebirds wore down the Thorobreds with their depth. The Bluebirds do not have players playing on both sides of the ball.


Highlands has 91 players on its roster and Harrison County has 32 including 18 freshmen. The Bluebirds do not dress any freshmen for varsity.


Different Surface:
Highlands plays on turf at David Cecil Memorial Field. The Bluebirds played on grass at Harrison County. Highlands admitted it was an adjustment.


“We were slipping everywhere,” said Brad Veley, Highlands sophomore defensive lineman. “They were used to it so their backs got more of an advantage to get around us. We needed to have wider feet and get lower to cause piles to stop them. That is what helped us toward the end.”


Highlands unofficially has 3,009 yards in total offense. That averages 501.5 yards a contest.


Scouting  rest of Class 4A:
Highlands is one of four teams in Class 4A still undefeated. Three teams are 7-0 in Russell County, Knox Central and Warren East. Russell County and Knox Central could face off for the District 6 championship and possibly challenge Boyle County and Lexington Catholic for a spot in the state semifinals.


Lexington Catholic is 6-1 with its only loss coming to the Ensworth Tigers, a private school on the west side of Nashville. Ensworth is Tennessee’s two-time Division II-AA state champion. Tennessee separates schools that offer scholarships into Division II and those that don’t into Division I.

CYNTHIANA – Once they channeled the energy properly, the Highlands Bluebirds football team rolled to another victory.


Highlands scored more points against Harrison County than any opponent ever had in a 68-0 victory in Fort Thomas last year. This year’s Bluebird squad topped it by a point in a 69-10 victory here Friday.


Top-ranked Highlands stayed unbeaten at 6-0 overall and 2-0 in Class 4A, District 7 action and Harrison County remained winless at 0-6 and 0-1. The five-time defending state champion Bluebirds have won 26 in a row and moved to 79-2 since the start of 2007. The win also guaranteed their 57th consecutive winning season dating back to a 4-5-1 campaign in 1955.


Highlands outgained the hosts, 532-163 in total offense. The offensive line blocked well on all but five plays when the Thorobreds sacked the Bluebird quarterbacks for minus-36 yards.


The Bluebirds intended to pass the pigskin on all but five plays. Senior quarterback Donovan McCoy guided the offense in the first half completing 18-of-22 passes for 385 yards and six touchdowns. Junior Drew Houliston took over in the second half and completed 10-of-13 passes for 160 yards.


“They were really sending a lot of pressure so screens were there,” said Dale Mueller, Highlands Co-Head Coach. “We wound up throwing more screens than we normally would and gained a lot of yards with them.”


McCoy and Houliston completed passes to 11 different receivers. They often found themselves with a lot of green grass in front of them. Jensen Feggins and Brandon Hergott had four catches and two touchdowns each. Feggins had 129 yards receiving and Hergott 81. Ryan Donovan and Luke Brockett had four catches a piece for 76 and 69 yards respectively.


“It frustrates (defenses) a lot, but it just shows we can run the ball and pass the ball at the same time,” Feggins said. “It benefits us well. If our passing isn’t working, our run game is there for us.”


Harrison County threw for just 69 yards. Quarterback Robbie Stroub completed 7-of-16 passes for that total with no interceptions.


“We played the deep third (defense),” said Grayson Heck, Highlands sophomore defensive back. “We just kept everything in front of us and did not give up any big plays.”


Highlands overcame two turnovers in the first quarter to lead 21-3 after that stanza thanks to three quick scores. The Bluebirds recovered a Thorobred fumble and appeared headed to the end zone for their first defensive touchdown of the year. But they spiked the ball at the Harrison County 2 out of the end zone for a touchback giving the Thorobreds the ball at their 20.


After McCoy hit Colin Seidl for a 37-yard score after a short Thorobred punt, Highlands forced another three-and-out. The Bluebirds drove the Thorobred 22 before throwing an interception.


But the Bluebirds took over at the Thorobred 2 after a Harrison County turnover. They scored quickly when McCoy found Justin Weyer from two yards out.


Highlands answered a Harrison County field goal quickly. The Bluebirds took the opening kickoff to the Thorobred 49 and Feggins took a pass over the middle 49 yards to the house.


The Bluebirds forced the running clock with 5:42 remaining in the third. Hergott hauled in a 29-yard touchdown pass from Houlston.


It did not take long for Highlands to score again when Joe Paolucci recovered a Thorobred fumble. Brockett scored on a 27-yard pass from Houliston. The Bluebirds led 55-10 after three quarters.


Highlands scored 14 more in the fourth. Hergott recorded his second touchdown reception from 19 yards out and James Grau scored on a 2-yard run off the right side.


The Bluebirds did well in kicking extra-points. Brockett hit all eight extra-point attempts and Highlands failed on the run on a high snap of the other attempt.


The Thorobreds did have some success running the ball out of their I-formation and split backfields rushing for 94 yards on 37 carries to minus-13 on nine carries for the Bluebirds. Zach Mastin led Harrison County with 70 yards on 13 carries.


“I think they’re a well-coached team,” Mueller said. “They’ve got some stuff that they do well and they stuck with it. I think Harrison County is a football team that’s going to keep getting better and better. They have some young guys that are going to be fired up, be coachable and do well.”

5 Things to Know about Bowman's Framing

This past weekend Fort Thomas celebrated its local businesses with the Merchants and Music Festival.  Fort Thomas Matters sincerely enjoys promoting local business any way we can, so we reached out to a local entity to feature in our next installment of “5 Things to Know”.  Bowman's Framing is a reliable and reputable business on North Fort Thomas Avenue specializing in frames and mattes.  I contacted the president, Ken Bowman, to gather some interesting information that our readers should know about our local framing business more than two decades in the making.

If you need a frame for a particular piece or want to explore the gallery that Bowman’s Framing has to offer it is located at 103 North Fort Thomas Avenue, and their website can be found here: http://bowmanframing.com/index.htm

Early congratulations to Ken and everyone at Bowman’s Framing for their 25 years of excellent service in Fort Thomas.

Do you know a business or topic that should be featured in our “5 Things to Know”?  Leave your suggestion in the comments below.
Posted by Unknown at 10:43 AM 3 comments: 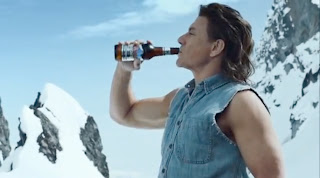 My man Van Damme, pounding some Coors Light. FTM is not a sponsor for Miller Coors.... but we could be.

- Superintendent Gene Kirchner checked in with Fort Thomas Matters regarding walk to school day. This is what he said:


The walk to school marquee has to do with encouraging students to be active and fit while reducing pollution and waste due to driving. It is something that our middle school health teachers have embraced and is part of a national initiative. I believe that staff members are also taking part by walking to school with students from various locations. While reduced traffic is not the primary goal, it would certainly be side benefit.

- On that same note, FTM also checked in with Gina Sawma, Food and Nutrition Director at Fort Thomas Independent Schools. She's going to give us a rundown next week of how Highlands lunches throughout the district has changed recently.

I had seen a funny spoof on YouTube from students at a Kansas high school, remaking FUN's, "We Are Young" into "We Are Hungry." In the video, students take a stand that the federally instituted lunch guidelines are just not enough food.

Highlands students have more options than most kids in high school around the nation, as they still have the privilege for going off campus for lunch, but I think mandating what you can eat and what you can't is the start of a slippery slope.


- Highlands continues to #BeatColonels. Highlands Soccer defeated Cov Cath and former HHS coach, Jeremy Robertson 1-0 last night at Tower Park in front of a raucous crowd. Highlands won their 3rd game in a row and improved to 9-6-2 on the year. Cov Cath fell to 11-5-2.

If you haven't yet, remember to click on the sports tab at the top of the Fort Thomas Matters to check in with G. Michael Graham's updates.

- DDAY for online enquirer access is Monday, October 1. It's kind of like Y2K. Not sure how it'll change, but everyone is bracing for the worst. Who's pumped to pay to view content online? I know I'm psyched.

Mama on a Budget: Artscapade 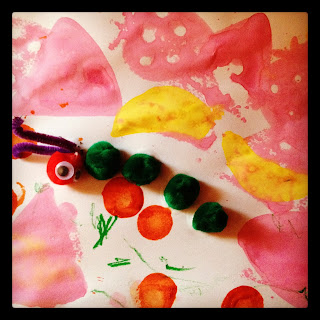 As much as I love scrubbing paint out of my living room rug, as much as I love scraping clay remnants out from between my floorboards, and as much as I love rubbing the skin off my fingers on the wrong end of a Mr. Clean Magic Eraser, I love it even more when someone else does it for me.  I am an artist, no doubt about that.  I was a graphic designer by trade previously; you know, the art with no mess.  So, I really want to instill the love of art in my children but I really hate how messy it can be.  Enter Artscapade; a children’s art class held in the Shaw Lane home of Fort Thomas resident Tanith Smith.