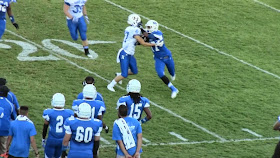 
It takes about five and a half hours to get from Fort Thomas to Paducah.


But the Highlands Bluebirds football team made sure they used their time on the bus really well. Road trips often build team chemistry.


Some teams struggle on the road for various reasons such as not playing in front of friends and family. The Highlands student section is known as the OZone. But the Bluebirds bring their own intensity no matter where they play.


“I like the trip because for me, it is just one big offensive coaches meeting,” said Dale Mueller, Highlands Head Coach/Offensive Coordinator. “I think the players like the rides too. Of course, I wouldn’t mind it if more local teams would schedule us.”


This will mark the longest trip of the regular season. The final road games are Saturday at Covington Catholic at 1 p.m. and Oct. 25 at Cincinnati Elder. Game time is 7:30 p.m.


Highlands and Paducah Tilghman met five times between 1989 and 1994. But none of the games took place in either Fort Thomas or Paducah. Highlands extended its series lead to 5-1 all-time against the Blue Tornado. Highlands beat Tilghman for the Class 3A state championships in 1989 (27-3) and 1992 (15-6).


Highlands does not travel to western Kentucky much. But the Bluebirds had success on their last trip there in 2008. They beat Hopkinsville, 48-21 in October of that year.


If Highlands wins another district championship, it will not have to hit the road until the state semifinals. It takes about 3.5 hours to make it to Bowling Green for the state championships. Class 4A plays on Saturday, November 30 this year unlike the Friday night game last year.


The Highlands supporters continued to travel well as many made the trip west.


The cheerleaders also came on the trip. They had some previous adventures on road trips. They came to Louisville Western last year on a bus without air conditioning.


The cheerleaders play a big role in helping the team build some intensity. They also traveled to John Hardin last week. The Highlands band and dance team generally do not go to road games.


“We just try to keep our voiced up and try to involve the crowd in cheers,” said Taylor Mitchell, Highlands cheerleading captain. “We have them repeat what we say.”


“We really like to support the football team,” said Ashley Bergmann, Highlands cheerleading captain. “We go to all the games. It does not matter if it is close or far away. We’re always there for them. We think that when we’re cheering, they do play better because they like our support.”


The trip did not come without issues. Three buses came to the game and one malfunctioned so the team traveled back on two buses.


Tilghman is the lone team the Bluebirds have faced from the Jackson Purchase.


The Jackson Purchase part of Kentucky borders Tennessee and is surrounded by the Ohio River to the north, the Mississippi River to the west and the Tennessee River to the east. It is comprised of Fulton, Hickman, McCracken, Ballard, Carlisle, Graves, Calloway and Marshall Counties.


The main power in western Kentucky is 1A power and Tilghman rival Mayfield. The Cardinals and Bluebirds entered the season as one of just six programs in the country with 805 or more wins in school history. But the two have never met on the gridiron.


Highlands ranks first in Kentucky with 847 wins in school history only behind 880 wins by Valdosta (Ga.). Mayfield ranks third in Kentucky with 810 wins and Louisville Male is second with 825. All three teams are a combined 14-0.


Highlands can now focus on the team that is constantly a threat to its dominance.


The undefeated Bluebirds travel to Park Hills for the annual district showdown with 3-1 Covington Catholic. The Twitter accounts exploded on both sides of the week leading up to the game last year. But Mueller wants the players to be smart when posting things on the Internet.

"I don't get involved in all the online stuff, but (being smart about posting on the Internet) is a good reminder," Mueller said. "It really isn't personal. The CovCath players are great guys. We just try to beat them in a football game."


CovCath had its bye week this week. The Colonels beat Boone County and Dixie Heights to open the season before losing 45-7 to defending Ohio largest-class Division I champion Cincinnati Moeller. Moeller is the alma mater of Colonel Head Coach Dave Wirth.


Highlands leads the all-time series with Covington Catholic, 43-17. This includes nine straight wins dating back to 2006 during its run of six straight state championships.


Covington Holmes also had the weekend off. The Bulldogs are 3-1 under first-year head coach Ben Nevels.


But Harrison County did play Friday. The Thoroghbreds (2-3) lost 64-21 at Bourbon County. Class 3A Bourbon County was undefeated last year before losing 35-10 at Belfry in the state semifinals.


Highlands is one of just three teams in Class 4A that are still undefeated. The other two are familiar opponents.


The Golden Eagles then beat Perry County Central (53-7) and Harlan County (36-14). They have not left Paintsville and won’t until an Oct. 4 trip to Ironton (Ohio).


The Golden Eagles often battle Ashland Blazer for the District 8 championship. The two meet Oct. 25. Johnson Central then meets Belfry on Nov. 1 to end the season.
G. Michael Graham at 1:25 AM
Share