While U.S. men who served during World War II are widely and deservedly known as "The Greatest Generation," too often the contributions of women during this period in history is overlooked.

Looking for Lilith Theatre, of Louisville, will shed light on the compelling stories of nurses, factory workers, pilots, USO performers, homemakers and others in the play What My Hands Have Touched: U.S. Women in WWII. 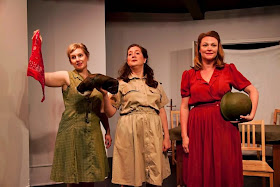 
The play will perform at the Carrico/Fort Thomas Library at 7 p.m. on April 17 as part of the Library's Arts & Culture Series.

The play glimpses into the hearts and minds of these female "warriors" and celebrates their contribution to the war effort while raising important questions about the realities of war.

Seating is limited to the first 300 people.

To register for this special event visit www.cc-pl.org/programs/arts-and-culture-series to register.

The play is the second of three Arts & Culture Series after-hours cultural events at the Carrico/Fort Thomas Branch.

Campbell County Public Library has been awarded an Arts Access Assistance Grant through a program of the Kentucky Arts Council, the state arts agency, which is supported by state tax dollars and federal funding from the National Endowment for the Arts.

The final event of the series will be the Kentucky Symphony Orchestra's Flood Wall Jazz Quintet at 7 p.m. on May 26. Registration for that event opens March 29.