The victim was identified as a two-year-old girl. The young victim was taken to Children's Hospital for surgery, and was in critical condition Monday night, police said.

The girl's mother and a 5-year-old child were at home when the shooting took place, according to Highland Heights Police Chief Bill Birkenhauer.

Birkenhauer said the victim's 5-year-old brother was also involved in the shooting but it was still unclear how or where the victim was shot and where the gun came from. Only one shot was fired, officers said.

"It's difficult, it's very difficult and the officers ,especially the first responders, it's not easy for them," Birkenhauer said.

"As always, guns should be locked up and out of the reach of children, I can say that," Birkenhauer said. "I did not say the gun was not secured, so again I can't comment on that yet."It remains unclear who fired the gunshot and where the gun was kept."
----------------------------------
A shooting has occurred on 19 Bon Jan Lane in Highland Heights and just minutes ago as of 5:00 PM, authorities have obtained a search warrant to enter the house.


According to 911 dispatchers and neighbors on the scene, they believe the victim was a child although police are not saying how old the victim was.

The shooting happened at 2:15 PM on Monday afternoon.

Police did say that the victim was alive when they were taken away from the house to head to the Children's Hospital. Officers say that the incident "was not domestic in nature," but would not comment on whether or not it was accidental. 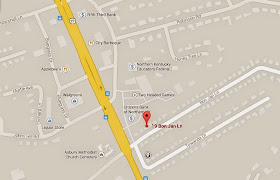 This story will be updated.
Mark Collier at 5:16 PM
Share