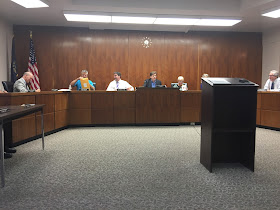 The Fort Thomas City Council met on Monday, June 20th.  The meeting was called to order at 7:00 pm and all members were present.

Minutes from the June 6th council meeting were read.


Police Chief Daly shared information regarding the apprehending of a burglary suspect on June 3rd at 25 Hawthorne.  The suspect, a twenty-one year-old male,  had allegedly been breaking into homes and cars in the area and was charged with second degree burglary.  FTM will have more on this story soon.  Chief Daly wished to stress to residents the importance of making sure their car doors are locked and their property is secured.  "Basically, we're seeing petty change and little items taken," said the Chief.  "But with that said, the police department stresses to the citizens of the city to make sure you lock your personal property, such as your car, and anything around your house, like your shed, so we can try to prevent these things in the future."

Chief Daly also touched on the stabbing that took place this past week.  Fort Thomas resident Hank Shouse, 49, is being held at the Campbell County Detention Center and is being charged with first degree manslaughter.  The chief stated that this case was relying heavily on witness testimony due to the fact that it happened in a well-populated area in the middle of the day.  FTM will continue to provide updates on this case in the future.

In his report, Ron Dill spoke about the update on the VA homes project.  The presence of asbestos and lead paint in the homes has caused a delay on the part of the VA, but the contract with Bloomfield/Schon is remaining in place, an agreement that was made one year ago.  A motion was passed to grant a 180 day extension.  "On their end, they have been extremely helpful," Mr. Dill stated.  "The hold up is the asbestos on the VA end," he added.  The contract allows for two 90-day periods of extensions. He added that Bloomfield/Schon was still completely committed to this project, and thanked them for their patience.  FTM will have more information on this as it becomes available.

Council members also voted to approve the 2016-2017 budget.  A summary of the budget is as follows:

Administration: there is a 1.27% increase over the previous year, due to budgeted salary increases, and a medical insurance increase of 14.39%.

Finance Department: there is a 3.48% increase over previous year due to restricting payroll costs, a medical insurance increase of 14.39%, and a city file server replacement.

Police Department: there is a 3.34% increase over the previous year, with a medical insurance increase of 16.14%, and funds allocated to large ticket items such as computer replacements, body-worn cameras, tasers, and one additional police cruiser.

Fire Department: there is a 1.86% increase over the previous year, with a medical insurance increase of 14.69%, a County Employee Retirement System (CERS) decrease of 0.92%, and funds allocated for large ticket items such as computer upgrades, radio equipment, firefighting foam, hose replacement, and paramedic supplies.

When asked about the reasoning behind the new budget, council member Roger Peterman stated, "The Council approval was based on a recommendation from the Finance Committee.  Upper management has a lot of experience with the budget process and understands that in each budget year the city can only budget what it anticipates in receiving in revenue that year.  When a budget is presented to the Committee, compromise and prioritization has already taken place with staff.  This year, changes included a $50,000 reduction in personnel costs due to realignment of staff responsibilities, while at the same time adding a position to public works that will help enhance the appearance of the city even more."