Like many 16 year olds, Riley Kuether spends his days backpacking, writing and playing his guitar. Unlike many teenagers, he's also been busy planning a benefit concert.

"It is open to anyone," Kuether says. "All they need to do is bring goods."

Kuether grew up in Fort Thomas, attending Moyer elementary and Highlands Middle School. Currently a junior at Highlands High School, Kuether lives with his mom, dad and sister, Emeline. In his sixth year of Scouts, the benefit concert is Kuether's last step in earning his Eagle Scout rank.

Prior to this concert, Kuether worked to earn merit badges and served as Senior Patrol Leader, a leadership position in his troop for six months. In that position he was in control of scheduling events, sending out information and running meetings.

Kuether says he's volunteered at the Emergency Shelter of Northern Kentucky two times. "Every time it has been amazing," he says. "In my first trip we took a tour of the building. It is small with a limited amount of goods. It can use so much help and that is what I want to do for them. Every time I went the employees were kind and helpful and the people staying there at the time were some of the nicest people I have ever met. They deserve more and that is what I'm trying to give them. "

In addition to gathering goods for donation, Kuether says he hopes the small acoustic concert also will raise awareness for homelessness in the area. "This took me a while to think of," Kuether says. "I wanted to come up with something different while at the same time something that is a large part of my life. Since I have been playing guitar for about seven years now I thought incorporating music into my project would be a great day. Eventually I landed on the idea of a concert. My girlfriend, [Mullins], then suggested that I have it at my church and to make it acoustic to give it appeal to more people."

Kuether says he and his fellow musicians plan to cover every type of music genre during the concert, including folk, more modern songs and some rock and roll. 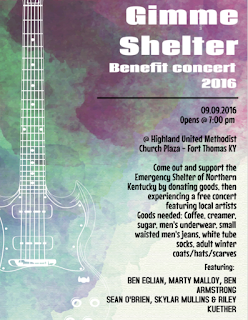 "To me it is very important to help people in your life no matter what," Kuether says. "And what is better than to help people that don't have anything? I really want to make an impact on the community. Whether this turns out to be small or large, I want to do something. I want to help someone."