Running to End Alzheimers is Personal for Steve Schwalbach


Imagine running across an entire state in just one day.

That's the goal of Steve Schwalbach (48) as he runs 42 miles in one day across the state of Rhode Island on Saturday, September 17, 2016. The next day he plans to participate in the Newport Walk (18 miles) where he'll also be doing a presentation.

This is not Steve's first state to run through. In 2014 he ran 208 miles through the state of Kentucky from the Tennessee border to Tower Park in Fort Thomas in seven days. Then, in 2015, he decided to tackle Ohio and ran 328 miles from Cleveland, Ohio to Fort Thomas, Kentucky in nine days. Last Spring he took on Florida. He ran 234 miles from Daytona Beach to Sarasota, Florida in seven days. He's also run in several marathons including the Boston Marathon.

Steve's run is personal. His mother, Margaret "Jackie" Schwalbach, died from Alzheimer's in March of 2015.


In 2004, Steve saw his mom bedridden from the disease. "I just wanted to do something to fight this terrible disease," said Steve. So he decided to raise money for the Alzheimer's Association by going back to what he loved in high school — running. Steve was on Highland's track team in 1981-1985 when they won the state championship in 1983. He ran competitively in college, but then gave it up for nine years.

Steve runs not only in honor of his mother, Jackie, but also a close family friend, Clem Fennell II, who also died of Alzheimers. Clem was one of the founders of the Fort Thomas Junior Football League which was started almost 60 years ago.
http://www.fortthomasmatters.com/2016/09/fennell-family-to-be-honored-by-fort.html

"I'm not a doctor, not a scientist, I'm just a runner trying to make a difference." says Steve.

When Steve decided to do his first run to raise money for the Alzheimer's Association, friends and family all seemed to know someone who was struggling from the disease. He ran that first time with the names of 15 people on the back of his shirt. Now, at least nine of those people have passed.

With each stride and each breath, Steve hopes to get closer to the goal so many others want also, a cure for Alzheimers.

To help Steve raise money for the Alzheimer's Association, please go to:
http://www.jackiesrun.com/ 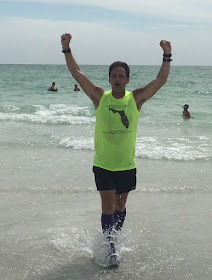