Sports fans know that this is the perfect week of sporting events with the Major League Baseball World Series beginning, the heart of the season for the National Football and National Hockey Leagues, and the opening tip of the National Basketball Association’s regular season.  Hopefully not lost amongst all that sporting glory was the first annual Johnson Elementary World Cup that occurred on Wednesday October 26 at the Highlands High School Football field.

The World Cup featured non-stop action as a team of Elementary school ringers faced off against their foe: the teachers!

The teams for this showdown were set earlier this month with the students getting “drafted” by placing the winning bid at the Johnson Hullabaloo.  Those who bid the highest got to join with ten other students, representing all grades, to face-off against their teachers. The students faced a stacked roster of ten teachers, student teachers, and teacher aides.

The game-action was intense with the students getting an early goal off the foot of Jake Wilson.  The teachers fought back but ultimately fell to the students, losing 3-1.

The Elementary students were coached by Bengals player Robert Jackson and their goal was tended by Highlands High School sophomore and Junior Varsity soccer goalie Will Burnham.  The many fans in attendance (estimates place approximately 150 people there to view the action) were kept apprised of the on-field action by Zach Wells, local Sports Anchor, who announced the game.  Additionally, the Highlands High School pep band filled the air with the music of fall sports! 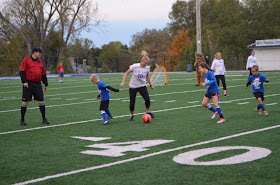 Jay Jay, Johnson Jaguars mascot, tended goal for the teachers but also tried his hand at refereeing, at one point giving a red card to one of his own teammates!

In the end, though, the students won twice: once on the field and a second time because of the money raised through this Hullabaloo auction item, all of which will go toward continued improvement of the student experience at Johnson.  In total, $550 was raised from this event for Johnson and an additional $300 was raised that evening during a collection for fitONE, a charity co-founded by former Bengals Player Robert Jackson.  Amy Silverton, who planned the event along with Nicole Schilling, said, “that’s what excites me, seeing one good cause help another good cause.”

Much thanks to the teachers, students, parents, and local celebrities who contributed and donated their time and efforts to make this first annual soccer World Cup a huge success!

The rosters are listed below: 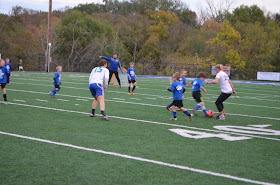 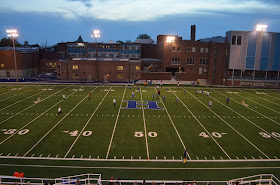