This is the story of a local news reporter, a cat named Moxie, a pet detective complete with bloodhounds, and the support of the Fort Thomas community (with a shout out to Ft. Thomas Animal Hospital).

Spoiler: It has a happy ending.


Moxie is a 9-year-old white silverback Himalayan, "the prettiest cat ever," Macke says. An indoor cat, Moxie is declawed in the front and rarely runs—in the past, when she has gotten out, she's been found sitting by the front door.

Macke was coaching a basketball tournament in Columbus the weekend Moxie disappeared. The family believes Moxie and a stray they took in, named Baby, escaped overnight Friday. Baby returned. Moxie did not. And when Moxie wasn't found by the front door come Sunday, worry set in.

Macke posted video footage from her home's security camera on her Facebook page. She wrote: "Upper left hand there's some kind of animal—then our other little black cat runs across the sidewalk. I pray that isn't a coyote that got our little cat. Can anyone make this out? (Neighbor kids left our door open) Black cat named Baby came home. Moxie didn't."

Macke and her family assumed she was gone: either a coyote got her or a family took her in (she was without a collar). Neighbors said they had heard coyotes howling in recent nights. Someone found a clump of white fur in the yard.

"We were heartbroken," Macke says. "I put something on Facebook and it was shared 1,200 times. It got huge hits. We were absolutely so heartbroken. We kept going outside. We kept looking. Anytime the kids would come home from school we would walk miles and miles. It was just horrible. We all felt terrible."

Feeling down at work, Macke says the assistant news director suggested she call the pet detectives.

Pet Search and Rescue calls themselves "experts in pet search and rescue, and investigations, and are available for consultations and in-person searches on a limited basis with trained Search K9s." A Google search of "pet detective" brings up many, but Macke found this one and, in particular, Jim Berns.

Macke received an almost immediate response to her email to Pet Search and Rescue, and they directed her to Berns. The next morning Berns called Macke and explained his process and his price: $475 for two hours.

Berns said he could come the next day but Macke feared it would be too late. It was day five, and it had been raining all week. So Berns said, "I'll come tonight."

He asked for a picture of Moxie, and Berns and his team made huge, heavy duty signs. They spent the first hour hanging these signs up all over Fort Thomas. Macke was on the air, and her kids were texting her: This is a waste of time, they said.

But Macke was determined. "This was my last-ditch effort," she says. "It was expensive, but I knew I would go to sleep well at night knowing that I did everything I could to find Moxie."

The next hour Berns and his team walked miles with their dogs, trying to pick up scents. Macke says Berns extended the time and even gave Macke some money back, asking that she give it to the basketball teams she coaches.

Despite Berns' excellent track record, Moxie wasn't found. But even when Berns isn't physically working, the work he puts into his searches continues on its own: Folks drive past the huge posters and take note. The dogs barking get pets on the move. So although the situation seemed dire, there was still a (small) bit of hope.

Macke had gone home between shows, and needed to get back to work. Twenty minutes to 10 (the Ten O' Clock News), Macke's phone began ringing and beeping. She was on a call with basketball coach Bob Huggins, and couldn't pick up her cell. After the interview Macke immediately called her husband, Chris.

Moxie had been spotted.

Enter Patty Penrod. Penrod had taken note of the Berns' large signs, so when she saw a white cat in the neighbor's yard on Hanover Place in Fort Thomas, she immediately knew: It was Moxie.

"He was actually behind the neighbor's shed," Penrod says. Penrod had called Macke's husband, Chris, and while he drove over with his daughter, Piper, Penrod took a can of tuna over to her neighbor's yard to try to lure Moxie out. No luck.

At this point it was 11 minutes to the Ten O' Clock News and Macke was Facetiming with Piper. Piper ended up army crawling underneath a structure to grab Moxie, which Macke watched live, on set, minutes before she was to appear on air.


"I yelled out in the newsroom, 'They found Moxie!'" Macke says.

Penrod says there's some undeveloped land between her house and Macke's house, and Penrod believes Moxie took that route—the same route Penrod's and Macke's sons used to use to visit each other. "I was just really happy that we spotted it and they got their cat back," Penrod says.

During the commercial break Macke texted Berns to tell him that Moxie had been found.

Sidebar: When Macke and her family were searching, Jenn Rinar, a vet tech at Ft. Thomas Animal Hospital, stopped by Macke's house after seeing the signs Berns had put up about Moxie.

"I actually had a client drop off another dog they found on Grandview," Rinar says. "After work I drove up and down Grand Ave., asking neighbors [about the missing dog]." It was during this search that Rinar saw the signs about Moxie. Unable to find the dog's owner, Rinar returned to work, got the dog and, and on her way to take the dog home for the night, stopped by Macke's house to offer tips on how to find Moxie.

Rinar, who grew up on a farm, has been a vet tech for 17 years. She's been with Ft. Thomas Animal Hospital for a little more than two years, having recently moved to Independence, Ky., from Cleveland, Ohio.

"It was great," says Macke, who now plans to use Ft. Thomas Animal Hospital for all her pets' veterinarian needs.

"Never in a million years did I think we would find her," Macke says, who turned it into a lesson for her kids: "If you guys go missing, I'll never stop looking for you," she says.

While Moxie's story had a happy ending, in part thanks to the pet detective's help, many pets' endings aren't as sweet. How can you help? Here's one way: 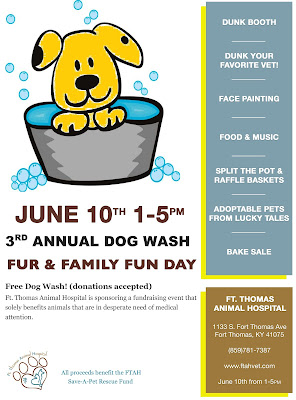