Many know that Fort Thomas resident Dan Gorman, owner of the Hiland building, has big visions for the city.

These visions include his recent purchase of 20 Grand, which we'll share a story on soon. What many don’t know is that his ability to problem-solve via acquisitions, the repositioning of existing properties and the building of new properties to meet an area’s demand has allowed him to make a difference well outside of our central business district. Gorman's work in Kigali, Rwanda, Africa, is providing jobs to many and allowing a new segment of the population to buy, instead of build, their own homes.


Gorman, founder of United Property Group, Ltd., recently founded United Property Group, Ltd., Africa. Instead of focusing on acquisitions, UPG Africa is a construction company based in Kigali, which is Rwanda’s capital. Its mission: “To partner with Rwanda’s housing stakeholders in a collective task of neutralizing complexities that technically surround the affordability and delivery of decent family dwelling units among the low-income communities.”

To understand how Gorman ended up with a homebuilding company in Africa, we first must circle back to Fort Thomas. Some time ago one of Gorman’s neighbors brought back a student, Ronald Nkuranga, after meeting him on a mission trip. Nkuranga lived with Gorman's neighbors in Fort Thomas while attending Northern Kentucky University.

“We struck up a friendship and he was looking for a way to make extra money and I didn’t really have anything for him to do so I told him I’d pay him a monthly stipend to do a study on affordable housing in Rwanda,” Gorman says. “I was interested in it and he could also use it for his major project for college.”

What Nkuranga found was astonishing: The residents of Rwanda needed 50,000 houses a year but were only building 500. And no one was building a house that would qualify for a mortgage.

Many of the houses in Africa are built using inexpensive mud brick, requiring frequent repair. This takes both time and money. In addition, banks in Africa won’t offer a mortgage for homes not considered permanent structures. Mud brick is now banned, and concrete homes—which traditionally cost a great deal of money—are the only kinds of homes banks will offer mortgages for, hence the shortage.

So Gorman wondered: Is the need truly that great? And, could he figure out a way to build affordable concrete homes that would be eligible for a mortgage?

To answer these questions Gorman offered to pay Nkuranga to fly to Rwanda and set up appointments with people who could prove Nkuranga’s findings. And so, Nkuranga did. The following week Gorman flew to Rwanda and Nkuranga introduced him to bankers, government officials and mayors. “If anything, the need was actually greater than what he implied,” Gorman says.

Residents were thrilled with the idea that Gorman could possibly build homes that would qualify for a mortgage. Their questions: How many can you build? How quickly can you build them? Can you build a 1,000?

To find out, Gorman traveled the world. He found aluminum forms in China and lightweight cellular concrete in Germany. An African architect helped develop plans for a home that both looked nice and offered a culturally pleasing floor plan.

Traditional concrete homes can take up to six months to be built. To keep costs low, Gorman uses forms to cast the entire home in a few hours. If the system works as he hopes, a home could be cast in one day, and the next day the forms could be stripped, cleaned and set up next door to cast the next home. The special concrete provides good insulation as well as a smooth and clean look.

Ten to 12 local laborers are needed to build each home, in addition to local plumbers and electricians. The system creates jobs while also providing affordable housing. The 800-square-foot, three-bedroom house sells for about $25,000. 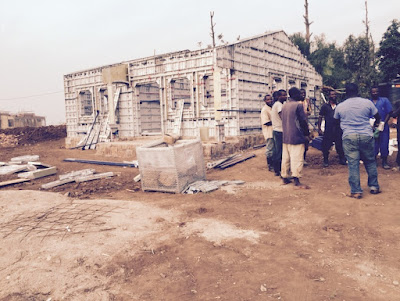 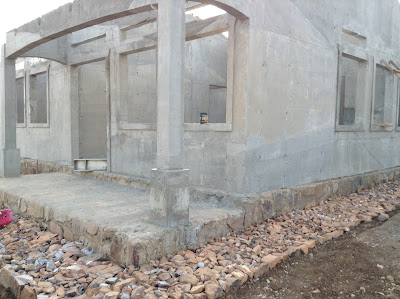 “The average salary in Rwanda is $600 a month,” Gorman says. “And if you can make $600 a month you can get an $18,000 mortgage. So that is really exciting to people. Because normally if you make $600 a month and there’s no concrete house to buy, you have to buy something with all cash. Or you build it yourself, which takes years. So it’s a game changer if residents can get a mortgage with the type of money they make.” The segment of the population Gorman is working with includes teachers, police officers and the like.

While building the model, folks continually stopped by and asked questions. “When will this be done? How much is it going to be? Can I buy one?” And every morning he and the workers would get in a big circle and pray for things like safety, productivity and good weather. “It was beautiful and awful at the same time,” he says. “When you build something like that in a third-world country, every single thing goes wrong and you don’t have a Lowes or a Home Depot to run to. This is one of the most challenging things professionally that I have ever done, getting that house completed. It was really challenging.”

After the model was built Gorman and Nkuranga, who runs UPG Africa in Kigali, had a big unveiling party. “The banks came out and they approved it, and the government is willing to provide the infrastructure, like roads and stuff like that,” Gorman says.

So far UPG Africa has one model home. They have an order for six more so they’re gearing up to produce those, similar to the model, but one right after the other. Gorman and Nkuranga hope that their unique aluminum formwork technology will allow quick production of homes resistant to climate changes and affordable to those living in Rwanda’s low-income communities.

“I don’t really care if I make money at it or not,” Gorman says. “It’s just something that I think is really interesting.”

Gorman is passionate about many things, which includes helping to turn Fort Thomas into a city where businesses not just survive, but thrive, and can compete with the positive changes taking place in neighboring cities.

He’s passionate about his family, which includes his wife, Leigh, who heads up the Fort Thomas Farmers’ Market every week, and his three children: Charlie, who attends Highlands Middle School, Gwen, a junior at Highlands High School, and Olivia, a University of Cincinnati DAAP graduate, who lives in Bellevue and works for Rookwood Pottery.

And finally, he’s passionate about his work in developing countries, developing affordable housing with innovative technologies, as seen in the concrete home he built, and hopes to build more of, in Africa.