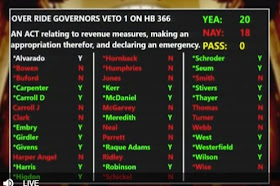 The legislative session is winding down and the last remaining items of the agenda are becoming a little more clear.

As Sen. Chris McDaniel (R-Taylor Mill) asked to introduce the bill, he said, "As a result of the bill, we were able to write a budget."

"I think the governor did this state a favor by vetoing this bill," said (Sen. Reginald Thomas (D-Lexington).

Senate President Robert Stivers said that voting to override the governor's veto on tax bill was a rough vote because they were overriding a Republican governor and raising taxes.

"But I vote AYE because this is the funding that will go to filling in those gaps," he said.

With the veto overridden, the budget bill that includes money to provide funding for the pension system, healthcare, transportation, and the SEEK up to $4,000 per student should be safe.


That budget includes also includes a line item for $7.6 million to help with the reconstruction cost at Johnson Elementary.

With the vote to override the governor's veto on tax reform, the other two bills (budget and CERS phase-in) should have an easier time through the House and Senate. They previously passed through both Chambers in votes that we not as close.

The Senate has taken a recess and will add those two bills to the orders of the day.

The General Assembly will end their session on Saturday at midnight at the latest.