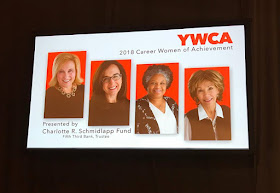 Under the theme “Women Leading Change,” the 39th Annual YWCA Career Women of Achievement Luncheon  was held in the grand ballroom of the Duke Energy Convention Center in downtown Cincinnati. The event is the single largest fundraiser for the YWCA Greater Cincinnati, founded in 1868. Proceeds from the luncheon, which attracts over 2,000 attendees each year, directly sponsor the YWCA community-wide programs serving more than 34,000 women, men and families such as domestic violence shelters, youth services, racial justice programming, job training and literacy education.

They continued: "Her career began right out of high school as a Fifth Third Bank teller after she found herself pregnant and in need of a job. She attended college courses at night. Her can-do attitude made her unstoppable.  While it took her 11 years to complete her degree, she simultaneously rose up the Fifth Third ranks to regional manager. Her commitment to education and community volunteerism is a reflection of the support and mentorship she received as she rose in her career."

Following additional promotions she now presides over Cincinnati’s Private Bank for Fifth Third’s Bancorp where she leads a team of 150 employees responsible for over $12 billion in total assets.

Halbauer  is the first woman to lead the Cincinnati Private Bank in its 25-year history. It was recently rated the top private banks in the Midwest by Global Finance Magazine.