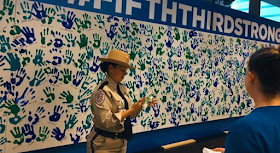 Recently, Fifth Third’s SVP and Chief Administrative Officer Teresa Tanner shared how the arts played a role in fostering healing after the horrific mass shooting in the bank’s lobby in September.

Recovery from the trauma began symbolically as Fifth Third’s leadership decided to cover the lobby’s broken glass windows with huge canvas boards. To show solidarity, employees were invited to dip their hands in paint and leave their handprints on the canvases. Hundreds of colorful handprints adorned the space, reminding Fifth Third employees that they are "Fifth Third Strong" and "Cincinnati Strong." This simple activity became a profound and hopeful action, something that brought the company together after an unspeakable loss. It served as a powerful reminder that, as terrible as that day was, they were united in support of one another.

Across the country, art therapy is increasingly used to combat post-traumatic stress disorder. The arts can be a powerfully effective tool: in fact, military servicemembers and veterans rank creative arts therapies in the top five (out of 40) interventions and treatments according to Americans for the Arts.

Across all branches and aspects of military life, the arts promote resilience during pre-deployment, deployment and the reintegration of military servicemembers, veterans, their families and caregivers into communities. The arts can help heal the mental, physical and moral injuries of war — and that same healing potential can hold true for trauma of other kinds.

Locally, the Cincinnati Arts Association has been building an expansive Arts in Healing program. The program trains artists to use music, dance, creative writing and visual arts to facilitate emotional and spiritual healing for area residents experiencing emotional and/or health crises. The program has been developed over the last three years inside Cincinnati Veterans Medical Center-Treatment and Recovery Center, where it conducts literally hundreds of hours of arts-based therapeutic activity. Arts in Healing also partners with TriHealth, UC Medical Center and more recently, Hospice of Cincinnati.

In Fort Thomas, Kentucky, veteran stage actors Justin McCombs and Crystian Wiltshire have developed a program with the local V.A. to address issues of post-traumatic stress disorder (PTSD) and traumatic brain injuries. As part of a supplemental activity for those undergoing a seven-week treatment program, the Veteran’s Shakespeare Project aims to help those who may feel particularly isolated from society to “create ensemble” — to build relationships with those around them.

“As actors, we get trained to trust and connect…in ways that can happen very fast,” says McCombs. McCombs and Wiltshire apply this approach inside the program, coaching vets to discuss and enact dramatic readings of Shakespeare. The process creates new bonds and safe connections that ease and accelerate healing.


PTSD and other emotional health issues come at enormous cost to families and communities, including our own. Art therapies that are proven to relieve stress, anxiety and depression offer vitally important routes to recovery.

Learn more about how your business can help support ArtsWave’s projects.
Mark Collier at 2:03 PM
Share