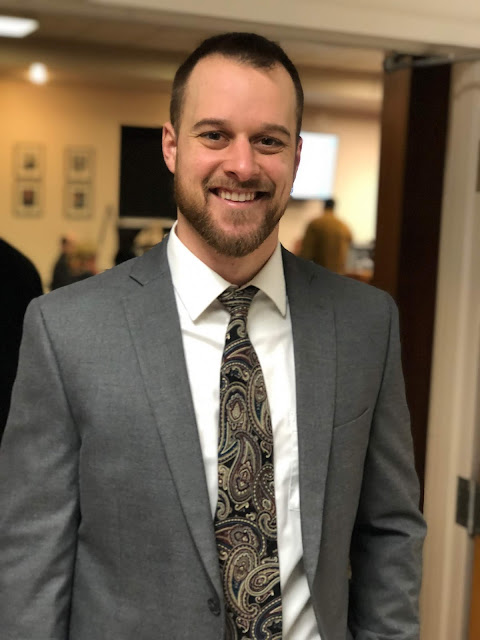 One Friday afternoon back in October, the Fort Thomas Police Department dispatch received a panicked call from a woman driving on I-471 who was trying to prevent her distraught passenger from jumping out of her car.

She had managed to pull over to the shoulder of the highway and was trying to restrain the man when Fort Thomas Police Officer Brandon Laffin pulled up. The officer saw the man break free from the woman’s grasp, and made a quick decision to physically prevent the man from running into traffic. Officer Laffin put himself in danger in oncoming traffic to keep the man from an act that very likely would have ended his life.

Officer Laffin was honored at the February meeting of the Fort Thomas city council with the Fort Thomas Police Lifesaving Award. A plaque presented by Chief Casey Kilgore, read in part "On behalf of the city of Fort Thomas, Kentucky, we thank you for your heroic and selfless actions on October 25, 2018. Your swift decision and willingness to put yourself in harm’s way undoubtedly saved a life."

Chief Kilgore also read a commendation outlining what happened on the afternoon of the incident and gave the officer a medal to wear on his uniform. Family and friends came out to support Laffin, and the entire body gave him a standing ovation.

Said Kilgore, "I want to add that we have a very dedicated group of police officers and firefighters. These men and women know the risks they take every day. They come to work and go out with a tremendous amount of professionalism and courage. We are very lucky to have them."


Congratulations, and thank you to Officer Laffin and his colleagues.