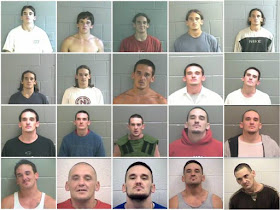 On March 22, 2019, at the conclusion of a four day jury trial, a Kenton County jury recommended 35 years in prison for Justin Raymond Bowlin, 37, after convicting him of 1st Degree Robbery, Receiving Stolen Property >$500, and 1st Degree Persistent Felony Offender.

Bowlin was arrested by Kentucky State Police on January 12, 2017 in Henry County after leading Trooper Joseph Brown on a 15 mile high speed chase. Once they apprehended Bowlin, troopers noticed the car he had been driving had blood down the driver's side doors and windows. After running the license plate, they learned the car had been stolen earlier the same day in Kenton County. Independence Police Lt. Jake Boyle soon obtained a warrant for Bowlin's arrest, charging him with 1st Degree Robbery.

Fort Thomas Matters broke the story of Bowlin's day of crime after coming upon a shattered storefront at the Fastenal store in Fort Thomas Plaza.

When the woman told Bowlin help was on the way, he asked her how long he had before police arrived. Bowlin then jumped into the passenger seat of a car driven by a young mother who had stopped to see if Bowlin was hurt. Thinking Bowlin told the woman to drive and she did, thinking he needed a ride somewhere to get help.

The victim testified she soon became scared after Bowlin said he had a gun so she stopped the car and asked him to get out. Instead Bowlin began punching her in the face as she struggled to remove her seat belt and jump out of the car. As Bowlin climbed over the console into the driver's seat, the victim told jurors she frantically tried to get her two-year old daughter out of a child seat in the back. Bowlin sped away, running over the victim's feet just as she pulled her daughter to safety.

Two additional witnesses in car behind the vicitim verified the victim's account of the robbery. 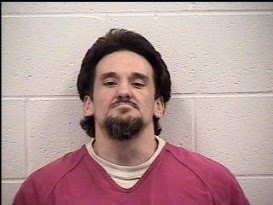 Independence Police Detectives Jeff Young and Mark Fielding also found the stolen car Bowlin crashed had a trunk full of power tools taken from a burglary at a Fastenal store in Fort Thomas in the early morning hours on the same day as the robbery. Company representatives placed the value on the tools at over $2,000. Independence Police Officer Travis Hager testified he was called to a residence on Sugarcamp Road where the homeowner had located personal property belonging to the victim.

Investigators would later discover Bowlin had lived at the same residence years ago and had apparently stopped there to ditch evidence from the car linking it to the victim.

Bowlin took the stand in his own defense. Bowlin testified he had been on a week long methamphetamine binge and had no recollection of the robbery. His attorneys argued Bowlin was so intoxicated that he could not for the intent to commit a robbery. On March 22, 2019, the jury of seven men and five women took only thirty minutes to convict Bowlin. In the sentencing phase of the trial, jurors also learned Bowlin had five prior felony convictions for Burglary (2), Theft, Wanton Endangerment, and Bail Jumping. Bowlin had been out of prison just under 8 months at the time of the robbery. After further deliberations, the jury then recommended a 35 year prison sentence. Bowlin must serve 20 years before being eligible for parole. Formal, final sentencing will take place before Kenton Circuit Judge Kathleen Lape, who presided over the trial, in May.

Commonwealth's Attorney Rob Sanders said, "Independence Police, with assistance from Kentucky State Police, did an excellent job to get this career offender behind bars before he hurt anyone else."

Sanders said the victim, who suffered a broken eye socket in the attack, has recovered physically but she and her now-four year old daughter still suffer emotional scars. "They suffered an attack so violent and scary, you'd only expect to see it in a movie," said Sanders. "But the mother's strength to save her daughter, even though her face was broken and bleeding, was remarkable."

Sanders also said the young mother showed incredible courage coming to court and standing up to her attacker. "Mr. Bowlin may have overpowered her the morning of the carjacking, but she was definitely the stronger of the two in court!"


Sanders also applauded the work of yet another Kenton County jury who imposed a heavy sentence on a repeat offender. "Kenton County is tired of repeat offender committing the bulk of our crime," Sanders said. "Thanks to this jury, Mr. Bowlin won't be victimizing our community again for decades!"
Mark Collier at 9:54 AM
Share