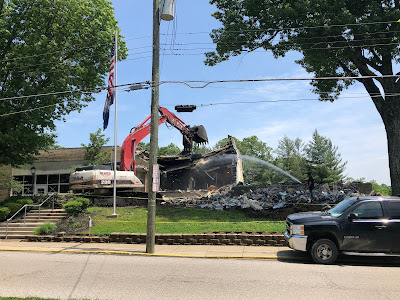 The Johnson Elementary Replacement Project is moving along, according to Jerry Wissman, director of operations for Fort Thomas Independent Schools. He made a brief report at the May school board meeting.

"Hosea Project Movers are on site now. They initially took down the gymnasium building...and hope to start on the ‘new edition’ from the 1980s...They are making progress, but we are going to try to have them make a little faster progress," he said.

As soon as the tearing down and removal is complete, Morel is ready to move in to begin construction, he said.

School Board Chair Jeff Beach mentioned that the traffic management plan for the Johnson move is working out very well. Traffic has been reduced, and students and parents seem happy with the bus service. In fact, he said, the schools may look at some of the ideas generated for the move that might be applied to school traffic issues in the future. Just something to think about, he said.

"Yes, a lot of people put a lot of effort into that, and it has worked out quite well," agreed Wissman.