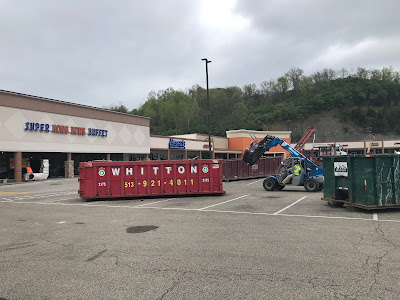 Churchill Downs, Inc., officials have confirmed plans are underway to open two new historical horse racing (HHR) facilities in Northern Kentucky. One of these will be added to a newly remodeled Turfway Park in Florence, and the other is planned to be built at the Newport Shopping Center.

The facility will include a bar, wagering area and 500 Historical Horse Racing (HHR) games. Timing is uncertain at this point due to COVID-19 restrictions, but the plan is to open in the fourth quarter of this year.

Fort Thomas Matters reached out to the owner of the property, but they have not yet responded. Preparations at the shopping center appear to be underway, however, at a site that stretches between Ace Hardware and Super Hong Kong Buffet.


The Transit Authority of Northern Kentucky (TANK) announced it is closing down its current Park-and-Ride at that location to make room for the new tenant. For now, the St. Therese parking lot is open as a temporary replacement for the stop, but TANK authorities said they are committed to working with the property owner to find a suitable replacement area.

According to a recent article in Bloodhorse Magazine, Churchill Downs CEO Bill Carstanjen explained, "We have received the required approvals to build a simulcast and historical racing facility in Newport, Kentucky, under what is referred to as an extension of the racing license associated with our Turfway Park facility in nearby Florence, Kentucky. This is analogous to our Derby City Gaming property located close to and associated with Churchill Downs racetrack."

Newport City Manager Tom Fromme was in discussion with Churchill Downs Friday morning. The city had been approached by the company several months ago to ask about zoning restrictions if they were to pursue a facility at the shopping center, he said. He added that the facility is permitted by Kentucky law and there are no city zoning restrictions.

Since that time, the developers have been working with the shopping center owners to work out details and have not approached the city with any further plans.

"A final development plan has not yet been submitted to the city. Based on preliminary discussions, there will be a significant investment made in construction. The development will also have approximately 40 employees although this is speculative at this point," said Fromme.

"This use is permitted by law and also court decisions made Kentucky courts...Based on information that I have, this looks like good development for the Center as well as the city of Newport."

The next steps will be for the developers to present a final development plan and begin the normal process for any development within the city, he said.


Churchill Downs operates a similar facility in Louisville called Derby City. More information will be shared as it unfolds.